Weekend Forecast: 'Our Brand Is Crisis', 'Burnt', & 'Scouts Guide to the Zombie Apocalypse' 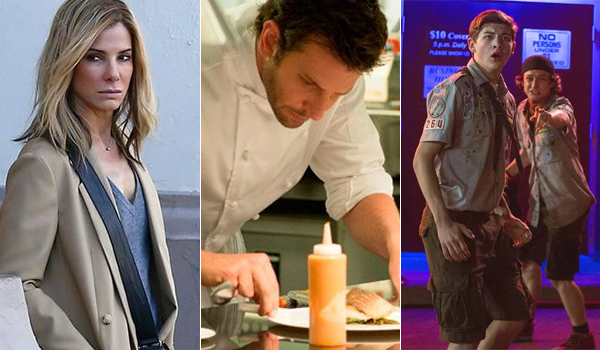 The final weekend before the lucrative holiday movie season brings three new wide releases. Will any of them make an impact at the box office?

Our Brand Is Crisis

- Sandra Bullock's presence could draw out her fans among adult audiences.
- The timely release amid the current presidential campaign could spur interest.

- Social media activity is weak across the board.
- With so much adult fare already in the market, there's not likely much demand for a poorly reviewed political comedy/drama.

-  Bradley Cooper's star power has continued to rise thanks to the massive success of American Sniper earlier this year.
- The film has generated stronger Flixster activity in the past few weeks than this weekend's other new releases.

- Cooper isn't a guaranteed box office draw yet -- see Aloha.
- Reviews are similarly heading south for this film, while social media buzz trails even that of Aloha.

Scouts Guide to the Zombie Apocalypse

- The experimental theatrical/VOD release from Paramount will no doubt mute box office grosses.
- The lack of reviews suggests this likely won't be a film that plays well beyond Halloween on Saturday.

BoxOffice predicts this weekend's top ten films will accumulate around $60.9 million. That would represent a 19 percent decrease from the same Halloween weekend last year (when the holiday fell on Friday), which tallied $74.8 million as it was led by Ouija's second weekend ($10.7 million) and the debut of Nightcrawler ($10.4 million).

Tags: predictions, Burnt, Our Brand Is Crisis, Scouts Guide to the Zombie Apocalypse