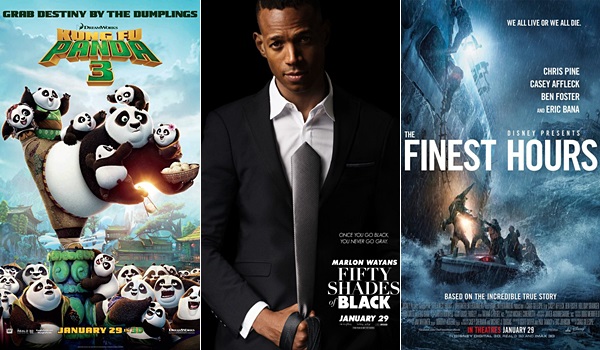 After nearly five years since the release Kung Fu Panda 2, Fox and DreamWorks Animation will unleash Kung Fu Panda 3 on January 29. With Kung Fu Panda 3 having the family marketplace pretty much to itself for over a month, BoxOffice expects the animated sequel to deliver one of the larger debuts ever for the month of January.

- While it fell off significantly from its predecessor, 2011's Kung Fu Panda 2 still grossed $165.2 million domestically and was well received by audiences and critics alike.

- The film's late January release date is very similar to the early February release dates of 2014's The Lego Movie and this year's The SpongeBob Movie: Sponge Out of Water, both of which greatly exceeded expectations.

- The film will have the family marketplace to itself throughout the month of February, as no other family films will enter the marketplace until the arrival of Disney's Zootopia on March 4.

- Potential could be limited a bit by the nearly five year gap between Kung Fu Panda 3 and its predecessor.

- Kung Fu Panda 2 performed far stronger overseas than it did domestically and that gap should widen even further with Kung Fu Panda 3. As a result, online activity levels for Kung Fu Panda 3 are likely to be inflated.

- Marlon Wayans experienced a career resurgence with 2013's A Haunted House, which opened with $18.1 million and finished with $40.0 million domestically.

- Fifty Shades of Grey and parody seem like a perfect match for one another.

- Young adults are more likely to choose Fifty Shades of Black over The Finest Hours, especially when it comes to date night audiences.

- In general, parodies aren't anywhere near as popular as they were in the previous decade.

- Open Road has never had a film open with a three-day weekend of at least $20 million.

- Being a Disney release could give the film a small boost, especially when it comes to holding power.

- The film will have the added advantage of higher priced 3D and IMAX admissions.

- A disaster film set at sea in the 1950s is unlikely to catch the attention of audiences, especially coming so soon after Warner's In the Heart of the Sea.

- It is hard to see there being much demand or room for The Finest Hours among its target audience; with 13 Hours, The Revenant, The Hateful Eight and Star Wars: The Force Awakens all likely to still have a box office presence in late January.