Weekend Forecast: 'In the Heart of the Sea' 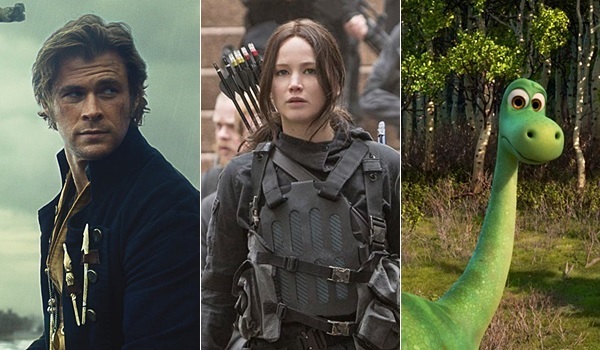 With moviegoers preparing for the highly anticipated arrival of Disney's Star Wars: The Force Awakens next weekend, Warner's In the Heart of the Sea marks this weekend's only new wide release. While BoxOffice expects In the Heart of the Sea to get off to a disappointing start, especially with its price tag in mind, the film looks like it will have just enough life to lead the box office this weekend.

In The Heart of the Sea should be aided by the overall competition from holdovers in the marketplace being modest.  Lionsgate's The Hunger Games: Mockingjay - Part 2, Disney's The Good Dinosaur, Warner's Creed and Universal's Krampus look to occupy places second through fifth this weekend, with all four films likely to be fairly bunched together.

In the Heart of the Sea

- Twitter activity for the film has been solid as of late. However, there is little doubt that activity levels are inflated from the film's overseas launch this past weekend.

- For the most part, director Ron Howard has had a good track record at the box office for over 30 years now.

- Higher priced 3D and IMAX admissions will provide a bit of a boost to grosses.

- Opening one week before Star Wars: The Force Awakens will obviously present a very tough challenge. A lot of moviegoers are sure to stay home this weekend to re-watch the original Star Wars films instead.

- 2013's Rush, the previous collaboration between Ron Howard and Chris Hemsworth, opened with just $10.0 million and only managed $26.9 million during its entire domestic run, despite strong critical reviews.

- In the Heart of the Sea was off to a modest start overseas last weekend with $18.5 million. While it is performing stronger than Rush did overseas, it is performing far softer than last year's Exodus: Gods and Kings.

BoxOffice projects this weekend's top ten films will total $70.6 million. That would represent a 4.3 percent decline from the $73.8 million top ten total from the same weekend last year, which was led by the $24.1 million debut of Fox's Exodus: Gods and Kings and also saw the $6.9 million launch of Paramount's Top Five in semi-wide release.

Tags: box office predictions, In the Heart of the Sea