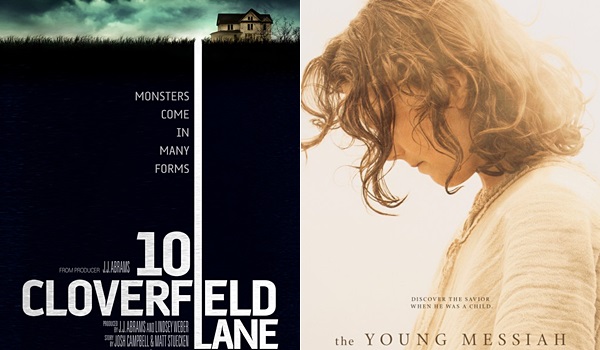 Three new wide releases will enter the marketplace the weekend of March 11. BoxOffice expects the newly re-titled 10 Cloverfield Lane to be the weekend's top new release after it was just revealed on Thursday that the Paramount release is a "relative" to 2008's Cloverfield. Also opening in wide release will be Focus' The Young Messiah and Sony's The Brothers Grimsby.

- Early online anticipation for the film has exploded overnight after it was revealed on Thursday that 10 Cloverfield Lane, while not a sequel to Cloverfield, is considered a "relative" to Cloverfield. The buzz generated from that announcement has been intensified by waiting until the start of the film's marketing campaign to make the revelation official.

- Initial online reaction to the film's trailer is very positive.

- As the first post-The Force Awakens film from J.J. Abrams' Bad Robot Productions, 10 Cloverfield Lane could get an additional boost from Abrams' growing number of fans.

- Cloverfield was extremely front-loaded. In having the two films related 10 Cloverfield Lane may not have that much appeal outside of the pre-existing Cloverfield fanbase.

- If 10 Cloverfield Lane ends up being only very loosely tied to Cloverfield that could lead to softer word of mouth, regardless of the quality of the film.

- The film should have a built-in audience thanks to being based on the Anne Rice novel Christ the Lord: Out of Egypt.

- Releasing The Young Messiah a few weeks before Easter should provide an added boost.

- There aren't that many films that focus on the life of Jesus before he was an adult. That could help The Young Messiah stand apart from other films about Jesus that have come before it.

- Being based on a non-Biblical book about Jesus may cause many Christians to pass on the film.

- The film will be opening only three weeks after Sony's Risen and only five days before Sony's Miracles from Heaven. Competition from both of those faith-based films is likely to come into play.

- The film has been performing very softly on Twitter so far, though faith-based films typically don't generate high online activity levels (especially this far out).

- While he has been keeping a lower profile in recent years, Sacha Baron Cohen's last vehicle, 2012's The Dictator opened with $17.4 million and grossed a respectable $59.7 million during its domestic run.

- Early online activity for The Brothers Grimsby has been soft in general.

- The film has had its release date pushed back multiple times. That usually isn't a great initial sign.

- While the film's trailer suggests that The Brothers Grimsby might be more accessible than either Brüno or The Dictator were, the film also won't benefit from the buzz generated by the controversy surrounding both of those films.