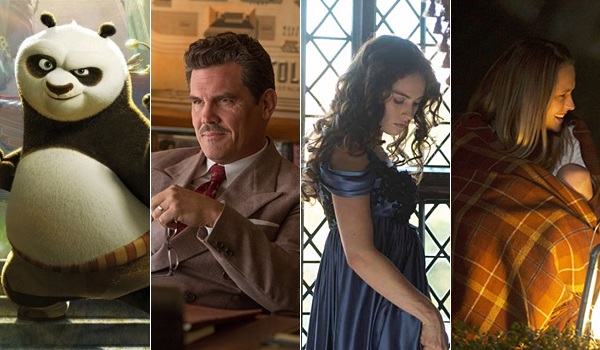 As is typically the case over Super Bowl weekend, the box office is set to take a back seat this weekend to Super Bowl 50. While it debuted under expectations last weekend, Kung Fu Panda 3 looks like it will comfortably remain in first place this weekend. Family films tend to hold up much better against the Super Bowl than films aimed at adult audiences, though Kung Fu Panda 3 will also likely experience a bit of initial front-loading coming off of its $41.3 million opening weekend performance.

- With the success of films such as 2007's No Country for Old Men, 2008's Burn After Reading and 2010's True Grit, The Coen Brothers have established a larger following over the past decade, while still remaining favorites with critics.

- While they aren't quite as strong as usual for a Coen Brothers film, early critical reviews for Hail, Caesar! have been good. The film currently boasts an 80 percent Tomatometer on Rotten Tomatoes.

- Opening over Super Bowl weekend is especially tough for films aimed at adult audiences. That should lead to additional back-loading for Hail, Caesar!, which is likely to be back-loaded beyond opening weekend to begin with.

- As was the case with The Finest Hours just last weekend, being set in the 1950s will likely make Hail, Caesar! a tough sell with teens and younger adults.

Pride and Prejudice and Zombies

- Leading up to release, Pride and Prejudice and Zombies is performing stronger on Twitter than both The Forest and The Boy were. On the other hand, the film is generating less Twitter activity than fellow Sony release The 5th Wave was in the days before its release.

- The film should have a built-in audience thanks to being adapted from the Seth Grahame-Smith novel of the same name, though that audience is likely inflating online activity for the film.

- Action horror and period horror both find their current popularity in an obvious downturn. Crimson Peak disappointed back in October, while Victor Frankenstein tanked in November.

- Coming so soon after Krampus, The Forest, The Boy and The 5th Wave is likely to limit demand for Pride and Prejudice and Zombies among its target audience.

- The film will face direct competition for teens and young adults from The Choice this weekend.

- Adaptations of Nicholas Sparks novels have a strong track record at the box office over the years. 2010's Dear John and 2013's Safe Haven both performed especially strong as February releases.

- The Choice could benefit from opening so closely to the Valentine's Day holiday.

- While Twitter activity for the film is likely being affected by the film's generic title, The Choice has performed far softer on Twitter than both last year's The Longest Ride and 2014's The Best of Me did.

- The film will face direct competition for teens and young adults from Pride and Prejudice and Zombies this weekend.

BoxOffice projects this weekend's top ten films will total $85.6 million. That would represent a 35.5 percent decline from the $132.8 million top ten total of the same weekend last year, though it should be noted that the Super Bowl fell during the previous weekend last year. Paramount's The SpongeBob Movie: Sponge Out of Water led the same weekend last year with a strong $55.4 million debut, while Warner's Jupiter Ascending opened with a relatively modest $18.4 million and Universal's Seventh Son flopped with a $7.2 million start.