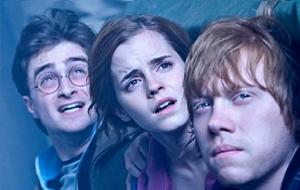 The last wave of Harry Potter hysteria is shaping up to be the biggest one yet.

Fandango is reporting more than 2,000 sold-out Potter showtimes across the country, from Anchorage, Alaska to Sunrise, Florida.

• Fandango's most anticipated film of 2011 (according to a December 2010 survey of more than 4,000 moviegoers);
• Fandango's fastest-selling title of the year so far;
• 62% of daily ticket sales on Fandango (followed by Transformers: Dark of the Moon, accounting for 14% of sales);
• Outpacing any previous Potter film in ticket sales on Fandango at the same point in the films' sales cycles.
• Selling twice as many tickets on Fandango as sold for the last Potter summer release (Half-Blood Prince) at the same point in that film's sales cycle.