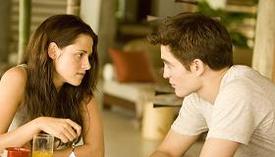 Boca Raton, FL -- MovieTickets.com (www.movietickets.com), the leading global provider of advance movie ticketing, reports that Summit Entertainment's The Twilight Saga: Breaking Dawn - Part 1 has made it in to the Top Five of the company's highest pre-selling films of all time, ranking fifth ahead of The Twilight Saga: Eclipse. In anticipation of the increased sales for the film's release, MovieTickets.com grew its theatre chain group count to 244 this week, which together operate over 17,400 movie screens.

Joel Cohen, CEO of MovieTickets.com, stated, "The success of The Twilight Saga and the trends we saw from advance ticket sales of the most recent film is phenomenal. The fans who have supported this franchise from the beginning show no signs of walking away from what we know will continue to be a record-breaking movie going event."

See below for the new list of MovieTickets.com's Top 10 all-time online pre-sellers, which now includes the three most recent films from The Twilight Saga franchise: