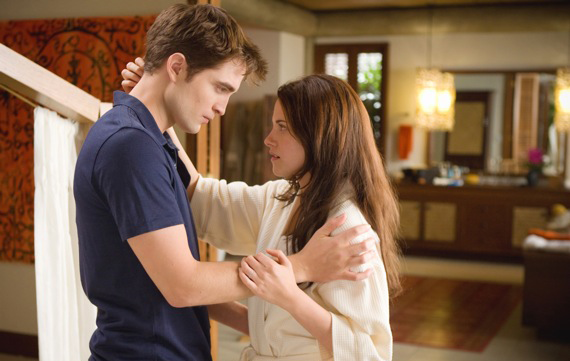 Extending its global dominance for the third weekend in a row, Summit's The Twilight Saga: Breaking Dawn - Part 1 was No. 1 internationally with an estimated $40.2M from some 9,000 playdates in 73 markets. The penultimate film in the blockbuster franchise has now earned $341M internationally.

Paramount's Puss in Boots earned an estimated $23M from 2,740 locales in 26 territories this weekend. The 3D toon has now earned $89.2M internationally. The film bowed in 13 markets this week, with the largest opening coming from France, where it purred its way to a strong $8.1M from 671 venues -- 2% more than Kung Fu Panda 2's bow and 19% ahead of Smurfs 3D.

Another children-themed movie, Warner Bros.' Happy Feet Two, took in an estimated $16.3M from 7,000 screens in 40 markets. The penguin movie's international cume to date is now a slightly underwhelming $34M.

Completing a trio of family movies, Sony's Arthur Christmas grossed $11.4 million from 53 markets for a pleasing international total of $45.3 million and global cume of $60.1 million.

Meanwhile, Paramount's The Adventures of Tintin took in $2.8M from 7,723 locations across nine territories, bringing its international cume to $50.6 million. The Steven Spielberg-directed movie opened with a solid $3.1 million from 343 locales in Japan, which was 140% ahead of Shrek Forever After (Sat-Tues) and in line with Kung Fu Panda 2 (Fri-Mon).

Fuga De Cerebros 2, a Universal acquisition, opened at No. 3 in Spain, grossing an estimated $2.3 at 345 dates. The gross is 39% bigger than the first Fuga, and Fuga 2 is also the 2nd biggest opening for a local film in Spain this year.

Disney's The Muppets earned $1.8 million from three markets for an early international total of $4 million and worldwide gross of $60.1 million.