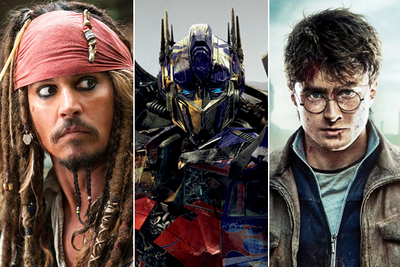 Most exhibitors will tell you that the movie business is cyclical. With that in mind, there's no reason to panic about 2011 being a down year at the domestic box office.

2011 was behind in a big way from the very beginning. 2010 benefited immensely from the fact that Avatar, a film released in December 2009, made more than $380 million during the calendar year. Since an Avatar-level blockbuster doesn't happen every year, it's no surprise that 2011 simply wasn't able to catch up.

While there were plenty of duds released in 2011, it's unfair to label a year that produced three billion-dollar worldwide hits—Pirates of the Caribbean: On Stranger Tides, Transformers: Dark of the Moon and Harry Potter and the Deathly Hallows: Part 2—as a complete disappointment.

Without further ado, here are the estimated stats:

Tags: Pirates of the Caribbean: On Stranger Tides, Transformers: Dark of the Moon, Harry Potter and the Deathly Hallows: Part 2