Which Oscar-Nominated Films Will Benefit The Most At The Box Office? 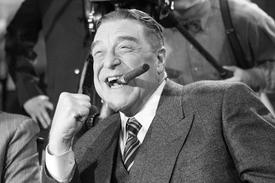 There's a reason that distributors campaign so ruthlessly for Oscar nominations. The prestige is nice, but it really comes down to the fact that Oscar attention = money. Just look at what The King's Speech did last year: $59 million before nominations were announced and another $80 million after.

Here's our look at the films that stand to benefit the most from the attention.

How do you get casual moviegoers to show up for a 101-minute long love letter to the silent era that's full of references only film obsessives pick up on? That's easy: become the frontrunner for Best Picture and Best Director. Harvey Weinstein's team is bolstering The Artist's potential in every way possible by running a well-oiled awards campaign. Will The Artist come anywhere near the $139 million domestic haul of 2010's The King Speech? Of course not, but anything over $35 million domestically—an entirely realistic goal at this point—should be seen as a massive victory for The Weinstein Company.

Fox Searchlight expertly guided this moving drama past the $50 million domestic plateau without rolling it out to more than 1,000 locations. That's a triumph made possible by great word-of-mouth and glowing reviews. With more locations on the way, a Best Pic nod and George Clooney's status as the Best Actor frontrunner could help add at least another $20 million to the theatrical haul.

We understand that a lot of moviegoers like to bury their heads in the sand when it comes to 9/11—just look at the grosses for United 93 and Reign Over Me—but that will be harder to do now that this touching, inspirational look at the aftermath of that tragedy has snagged a Best Picture nomination. Expect this Warner Bros. release to rebound after last weekend's underwhelming $10 million wide debut.

The Best Actress race is a close one between The Iron Lady's Meryl Streep and The Help's Viola Davis. If enough moviegoers latch on to the notion that Streep is going to win her second Best Actress trophy—the first came in 1980 for Kramer vs. Kramer—then this otherwise maligned film could experience a nice surge at the box office.

Remember all those great Gary Oldman performances? Well, none of them were viewed as strong enough to snag an Oscar nod. Mainstream audiences have tons of respect for Oldman, and they'll be happy to finally hear that he's being recognized by the Academy. By extension, TTSS becomes more of a must-see.

The critical community has been raving about this perfectly-executed Iranian drama for so long that it's easy to forget that most of North America hasn't even had a chance to see it yet—the Sony Pictures Classics release is currently playing at only 13 locations. A surprise nomination for Best Original Screenplay adds a great deal of momentum to a film that is already a lock for the Best Foreign Film trophy. Expect this one to do quite well on the arthouse circuit.