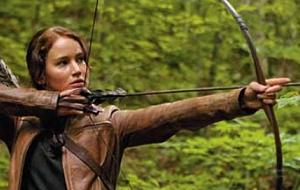 Los Angeles -- One week from tonight, millions of moviegoers across the country will be entering the arena of "The Hunger Games" as the movie debuts in theaters at 12:01 a.m. on March 23.

More than a thousand showtimes are already sold out across the country, from New York to San Francisco, from Maine to Hawaii. Theater owners are adding additional showtimes -- some as late as 3:00 a.m. on Friday morning -- to meet the demand for tickets, available at http://www.fandango.com/thehungergames/movieguide. The film's advance ticket sales have already surpassed those of the first "Twilight" movie at the same point in that film's sales cycle.

"It's our fastest-selling franchise-opener since ‘Twilight'," says Rick Butler, general manager and executive vice president of Fandango. "The brisk advance ticket sales are a testament to the strength of the incredible marketing campaign which has clearly resonated with fans and even those unfamiliar with the books."

"Hunger Games" currently represents 71% of today's ticket sales on Fandango. Here are a few more statistics from an online survey of several thousand "Hunger Games" moviegoers conducted on Fandango:
• 72% say the intriguing premise and action is what attracts them most to "Hunger Games"; only 18% picked the love story as the main attraction;
• 57% are planning to see the movie with a group of friends;
• 46% of respondents are 25 or older; 54% are younger than 25.