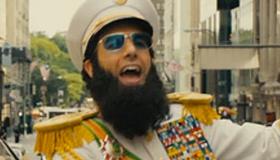 Cohen appeared in character as The Dictator's General Aladeen, shocking those in attendance. As he made his way down the aisle of The Coliseum Theatre in Caesars Palace, Cohen asked one attendee, "How much for your daughter?"

Once on stage, Cohen made plenty of jokes aimed at Hollywood. "I thought I was the only dictator here, but then I found out Jeffrey Katzenberg is here as well," quipped Cohen. The best joke of the bit came at the expense of Disney. Cohen joked that if exhibitors didn't book his film he would ignite bombs under their seats before saying, "Trust me, there are bigger bombs than John Carter. Calm down, Disney. I'll employ all of you. I'll kill your executive. Wait, you already did." The last part referenced the recent firing of studio head Rich Ross.

Cohen is doing all he can to drum up publicity for The Dictator—but Paramount's decision to move the film from a May 11 release date to May 16 does not bode well. The actor was riding high after Borat until Brüno destroyed a lot of mainstream good will. It's also very likely that jokes about terrorism—of which The Dictator seems to have plenty—won't come across as funny to a lot of viewers.