Live From CinemaCon 2012: Warner Bros. Presents Footage From 'The Hobbit,' 'The Dark Knight Rises,' 'The Great Gatsby' and Others 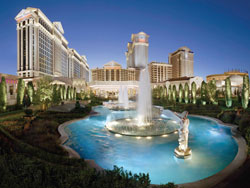 Dark Shadows: Tim Burton made a brief introduction in which he discusses being obsessed with the Dark Shadows show as a kid. Burton then introduced Johnny Depp to rapturous applause. Depp said simply, "Have fun" right before the clip played. The audience reaction was strong, but not overly enthusiastic.

The Dark Knight Rises: Christopher Nolan took the stage to introduce a series of images and brief scene snippets from his highly-anticipated film. There was plenty of Bane and Anne Hathaway's Selina Kyle to keep Batman enthusiasts entranced. The audience reaction was overwhelmingly positive.

Rock of Ages: Director Adam Shankman won the crowd over by joking, "I want to be Christopher Nolan when I grow up." It was the perfect way to lighten the mood after the serious tone of Dark Knight Rises. The footage of Rock of Ages featured plenty of Tom Cruise's rendition of "Wanted: Dead or Alive." Attendees responded well.

The Campaign: Jay Roach introduced a rough trailer for this Will Ferrell/Zach Galifianakis vehicle. Following in the great tradition of The Hangover and Horrible Bosses, both of which brought the house down at past Vegas events, The Campaign was met with a very warm reception. Keep a close eye on this one.

The Great Gatsby: Any concerns about Baz Luhrmann's The Great Gatsby being a bad fit for 3D were squashed by this incredibly impressive series of clips. Luhrmann introduced the footage via a recorded message.

The Hobbit: This extended look at Peter Jackson's new film will be picked apart for a while to come. Jackson introduced the footage via recorded message and he warned that 48-frames-per-second cinema takes some time to adjust to. Audience reactions were mixed at best. Like any new technology, a higher frame will certainly have its mix of champions and detractors.