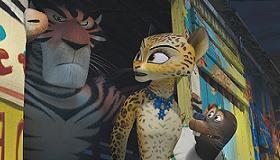 Sunday Update: Paramount estimates that Madagascar 3: Europe's Most Wanted will take in $60.35 million during its debut frame.

Thursday Update: Paramount reports that Madagascar 3: Europe's Most Wanted already has $7.5 million in the bank from only three territories:

Madagascar 3 opens in 28 markets this coming weekend including Russia, China, France, Korea, Brazil, and Mexico—day and date with the U.S.