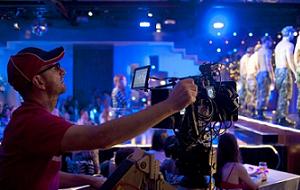 We have a movie-themed social experiment to recommend this week.

Walk up to a group of women who are discussing Magic Mike—it shouldn't be hard to find—and follow this script:

"Hey, do you remember the movie Contagion? It's the creepy virus thriller that came out last fall."

Someone in the group is bound to remember at least seeing the trailer.

"Well, Magic Mike is from the same director."

Now soak up the confused looks and walk away.

If you sat down to make a list of directors who were least likely to helm a film about male strippers, Steven Soderbergh would rank close to the top. The 49-year-old Oscar winner is known for socially-aware flicks such as Traffic, Erin Brockovich, The Informant! and Contagion. When he feels like having fun, he directs another sequel to Ocean's 11. Yet all it took was an impassioned pitch by Tatum for Magic Mike on the set of Soderbergh's Haywire to grab the director's interest.

Even though Soderbergh's pedigree is impeccable, Warner Bros. has wisely decided not to focus the marketing campaign for Magic Mike on him. After all, you don't need a degree in marketing to understand that the words "from the director of Traffic and Contagion" don't exactly correspond to a night of escapism at the movies with the girls.

Why are expectations for Magic Mike so high? That's easy: Channing Tatum. 2012 is Tatum's year. In February, The Vow became the go-to choice for couples around the world and it made $194.6 million worldwide thanks to that distinction. One month later, 21 Jump Street rode a wave of glowing reviews—from both critics and casual moviegoers—to take in $195.6 million worldwide. Now, with Magic Mike, Tatum is set to truly capitalize on his status as a sex symbol.

Critics are also on Magic Mike's side. In his 4 star review for Boxofffice, Mark Olsen writes that, "By way of sleight-of-hand, Steven Soderbergh's Magic Mike both is and isn't the freewheeling, fun-loving, male stripper extravaganza its trailers peddle." David Rooney of The Hollywood Reporter compares the film to Boogie Nights in his rave review.

Will a successful theatrical run for Magic Mike make it difficult for Soderbergh to step away from filmmaking? The director has toyed with taking a sabbatical from directing to pursue painting. The strange thing is he isn't acting like a guy who's trying to take a break from his profession. He has The Bitter Pill, a film that examines the dangers of subscription medicine, due out in February 2013. He's also working on an ambitious Liberace biopic with Michael Douglas in the title role.

Soderbergh's diverse career makes him one of the most interesting director's working today. Here's hoping he takes on painting in his spare time between film projects.