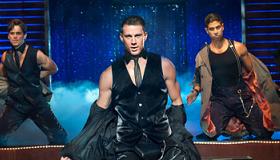 Saturday: Universal reports that Ted grossed $20.2 million on Friday, and it will go on to make $51.4 million. Meanwhile, Warner Bros. says that Magic Mike raked in an impressive $19.4 million on Friday. Boxoffice.com projects a $47.5 million for Magic Mike.

Fandango reports that the Channing Tatum male stripper movie, "Magic Mike", is #1 in today's ticket sales, representing 53% of all sales on Fandango on Wednesday. In a survey conducted Tuesday on the site with more than 1,000 respondents, Fandango found the following: