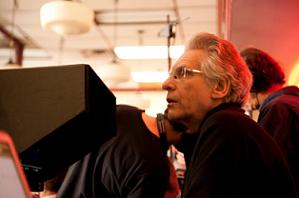 Boxoffice caught up with director David Cronenberg to discuss Cosmopolis, his visceral new film starring Robert Pattinson. We couldn't resist asking Cronenberg about Bret Easton Ellis' suggestion that he should direct the film adaptation of 50 Shades of Grey. Ellis is currently campaigning on his Twitter page to write the screenplay.

How does it make you feel when someone like Bret Easton Ellis says that you'd be perfect to direct an adaptation of Fifty Shades of Grey? I don't know if you heard all the fuss about that.

Yes, I did. You know, I haven't seen Bret for many years, but honestly it's flattering if anybody thinks I would be good to direct anything. Not that I would want to do that project, but the fact that Bret was thinking of me after all these years pleases me on a personal level. We met at a certain point and I was going to do American Psycho and he was writing the script and it didn't work out. I haven't been in touch with him since then. The way I react is, "Oh, Bret is still thinking about me. That's really nice!"

It would have been interesting to see your take on American Psycho.

I can almost not remember why it didn't work out, but I thought the book was absolutely brilliant. Of course, there were all kinds of problems to bring it to the screen with as much force as I thought it had in the novel. I couldn't find a way to create the cinematic equivalent of the book, and I think that was why I ended up withdrawing from it. I had fun with Bret, and I think he's a great writer. The fact that he's thinking about me for something he's enthusiastic about is terrific, interesting and unexpected. Frankly, it's interesting because most people who think of me in a cliched way think of me as being obsessed with gore or something like that, and obviously Bret was thinking of me in quite a different way. I thank him for that as well.