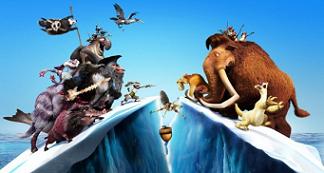 Sunday (8/26) Update: 20th Century Fox reports that Ice Age 4 took in another $7.6 million from 5,988 screens in 48 markets, pushing its international total $665 million. Ice Age 4 has passed Harry Potter and the Sorcerer's Stone to become the 10th highest grossing film in history at the international box office.

Sunday (8/19) Update: 20th Century Fox reports that Ice Age: Continental Drift banked an estimated $10.1 million from 7,055 screens in 58 markets this weekend.  The total international gross for the flick is now $647.3 million, with the worldwide gross estimated at $797 million through Sunday.

Sunday (8/5) Update: 20th Century Fox reports that Ice Age 4 is on pace to add another $32.8 million internationally this weekend from 13,678 screens in 62 markets. The animated flicks international total is now a staggering $587 million. The worldwide total is $718.8 million.

Sunday (7/8) Update: 20th Century Fox reports that Ice Age: Continental Drift took in another $80.6 million internationally this weekend, pushing its total to $198 million before it has opened in North America. The animated flick opens at home on July 13.

Key achievements, according to Fox:

Biggest Fox Opening Weekend ever in: Mexico and Brazil

Continental Drift opens in 14 new markets (19 countries) this coming week, including Germany and Holland, followed by an additional 16 markets/29 countries day & date with the US, including UK and Russia. South Korea and India release on July 26 and 27, respectively, followed by Italy on September 28.

These highlights are even more impressive considering that most of these accomplishments occurred in markets not yet in school holidays.

Please find by market results and details below and get ready for a BIG weekend at the International Box Office!

Australia: Release date: Thursday, Jun-28 (Staggered Holidays: 23rd June - 15h July).
#1 in the market.
Thurs: AUS$ 920K, (USD $920K) and CUME of AUD $2.3M, (USD$2.3M), including Queensland previews.
It is school holiday season only in Queensland (22%) of market, and the major markets of NSW and Victoria commence school holidays this evening. From the weekend we will have active holidays in 90% of the Australian market.
Opening day performance is: 341% of ICE AGE; 137% of ICE AGE 2; 90% of ICE AGE 3 (50% of market in holidays); 157% of KUNG FU PANDA 2; 193% of SHREK FOREVER AFTER
Performance in the market is also excellent and our business yesterday represented a massive 276% of BRAVE which opened last week.