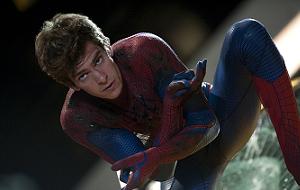 Sunday Update #2: Sony reports that The Amazing Spider-Man is off to a great start with $50.2 million internationally from 13 markets.

KOREA earned $13.4M on 1,213 screens, capturing a 71% market share. The KW15.8B total for Thursday to Sunday is the 3rd biggest of all time for a Hollywood film, behind only the 2nd and 3rd TRANSFORMERS films. This is 24% bigger than SPIDER-MAN 3 and 10% more than AVENGERS.

JAPAN opened with $11.4M on 1,092 screens, pulling in an estimated 84% of the country's Saturday-Sunday weekend box office.

INDIA grossed $6.0M on 1,236 screens, the biggest opening ever for a Hollywood film, 74% bigger than SPIDER-MAN 3, 73% more than AVENGERS, and more than double the lifetime box office of DARK KNIGHT.

The PHILIPPINES bowed with $3.2M on 529 screens, capturing the entire market in its opening weekend. This is the 4thbiggest Friday-Sunday opening ever (behind AVENGERS, TRANSFORMERS 3, and TWILIGHT: BREAKING DAWN.)

TAIWAN did $2.9M on 268 screens while taking in 73% of the market's weekend total. It is the 2nd biggest Fri-Sun weekend of the year (behind AVENGERS.)
HONG KONG earned $2.7M on 158 screens, pulling in 84% of the total market. This is the 4th biggest Friday-Sunday opening of all time (behind just TRANSFORMERS 3, AVENGERS, and HARRY POTTER AND THE DEATHLY HALLOWS PART II.)

SINGAPORE grossed $2.5M on 128 screens, the 3rd biggest Friday-Sunday opening of all time (behind TRANSFORMERS 3 and AVENGERS.)

THAILAND opened to $1.9M on 320 screens, capturing 81% of the market. 10th biggest Friday-Sunday opening of all time.

VIETNAM grossed $425K on 41 screens, the 6th biggest Friday-Sunday opening of all time (and the 5th biggest Hollywood film.) It has surpassed the lifetime box office total of SPIDER-MAN 3.

Sunday Update #1: Vajir Singh, editor of Box Office India, confirms that The Amazing Spider-Man is outpacing Marvel's The Avengers in India. No official numbers are available yet, but Deadline.com is reporting that Spider-Man took in more than $5 million, which could be the biggest debut for an American film in India.

"It wouldn't surprise me if The Amazing Spider-Man beats Avengers here given that it is a much more established and universal brand in India," says Nitin Tej Ahuja, publisher of Box Office India. "It's a huge release—over 1,000 prints across formats—and relatively smaller domestic releases on the same weekend will contribute greatly to a big weekend." For reports from Indian exhibitors, head over to the BOI website.