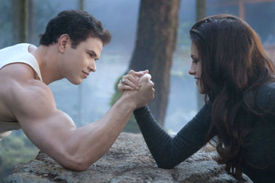 Sunday (12/9) Update: Summit is projecting a $23.5 million overseas gross this weekend for Breaking Dawn - Part 2. That would put the Twilight finale's international cume at $482.4 million to date. Worldwide, the pic has grossed an estimated $751.1 million through Sunday.

Sunday (12/2) Update: Summit estimates a $48.8 million international weekend for Breaking Dawn - Part 2. The film is currently playing in 73 territories and has an international total of $447.8 million to-date. The worldwide total now stands at $702.4 million.

The official release from Summit:

Summit is pleased to announce that from the 37 International territories that opened as of yesterday, Thursday 11/15, the international cumulative gross is a very impressive $38.8 million (not including the U.S. and Canada). 24 additional territories are opening today, Friday 11/16, which brings the total to 61 territories opened along with the U.S. and Canada. Nearly every market has opened to grosses at or well above the last installment in the franchise (Twilight Saga: Breaking Dawn Part 1). Some territory highlights below. NOTE: The next international estimates update will come on Sunday morning.