BOX OFFICE: 'Life of Pi' Holds Even Stronger Than Estimated 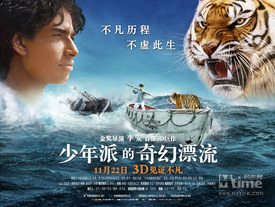 Monday (12/3) Update: 20th Century Fox confirms today that Life of Pi performed significantly better over the weekend than already estimated on Sunday. The Ang Lee-helmed pic took in $13.77 million for a new cume of $40 million.

Sunday (12/2) Update: 20th Century Fox estimates that Life of Pi grossed another $11 million in China during its second weekend, down just 15 percent from its strong debut last week. That would put the Chinese cume at $38.5 million.

Ang Lee's native Taiwan saw the film increase an impressive 47 percent over its opening to $2.58 million this weekend and a tally of nearly $6 million there.

Monday Update: 20th Century Fox reports that Life of Pi actually earned $16.1 million in China during its debut frame. 400 theaters were not included in the estimate that was released on Sunday.

Sunday Update: Life of Pi is off to a great start in China. 20th Century Fox estimates that Taiwan native Ang Lee's drama already has $10.5 million in the bank from 4,500 3D screens.