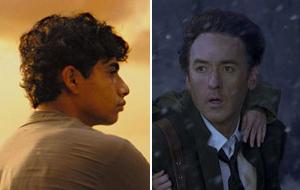 After spending two weeks in first place, Hong Kong's Cold War has been toppled by two American films: Life of Pi and 2012 3D.

Life of Pi grabbed the top spot with $16.1 million. Ang Lee's latest is also of to a good start in Taiwan with $2.3 million and Hong Kong with $1.4 million.

After the success of Titanic 3D earlier this year, China asked for more 3D flicks. The result: 2012 3D, a converted version of Roland Emmerich's disaster film. 2012 3D debuted to a healthy $14.3 million this week. The converted version has not been released in North America.

Cold War dropped to third place this weekend with $7.6 million for a Chinese total of $36.7 million. The drama has earned $4.4 million in Hong Kong.

Wreck-It Ralph finished in fourth with $1.3 million for a total of $9.7 million. The Disney release is coming up short compared to other recent animated films such as Kung Fu Panda 2 ($95 million), Ice Age: Continental Drift ($73 million) and The Smurfs ($41.2 million).

Rise of the Guardians is also a disappointment. The holiday-themed flick rounded out the top five with $1.1 million for a total of $4 million.