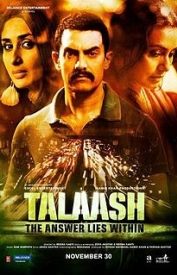 Saturday Update: Talaash led all upcoming films on its opening day Friday with 6,625 tweets. This is the first time since I've been tracking that a Bollywood film has led all films and is definitely a huge win for Reliance Big. Its Facebook numbers were much more modest with 120,896 likes. By comparison, Jab Tak Hai Jaan and Son of Sardaar had 5,975 and 1,459 tweets on their day of release, with 341,072 and 293,891 likes respectively. Based on these Twitter numbers it looks very likely that Talaash will beat out my two comparisons on opening day and over its first three days.

Friday Update: Talaash had a stunning 4,154 tweets on Thursday which vaulted it to the #3 spot on the day amongst upcoming films. This is the highest position of any Bollywood film for the year that I've tracked. Curiously, while its Twitter numbers have been expanding rapidly its Facebook presence has been very sluggish. Its Facebook likes rose to just 117,020 on Thursday which gave it less than a 4,000 like increase since Monday. So far for Friday it is amazingly in the #1 spot and on course to become the most talked about Bollywood film of the year that I've tracked.

Thursday Update: Talaash secured 640 tweets on Wednesday which was up 6% from yesterday but dropped it to #14 on the day amongst the new openers. Its Facebook likes rose to 116,695. By comparison, Jab Tak Hai Jaan and Son of Sardaar had 1,235 and 97 tweets three days before their release, with 323,666 and 278,290 likes, respectively.

Wednesday Update: Talaash generated 606 tweets on Tuesday which put it at #8 on the day amongst all upcoming openers, sandwiched between Hollywood blockbusters Thor: The Dark World (781) and Zero Dark Thirty (570). Its Facebook likes also rose to 115,328. Continuing my comparisons from yesterday, Jab Tak Hai Jaan and Son of Sardaar had 794 and 91 tweets three days before their release, with 319,299 and 259,678 likes, respectively.

Tuesday Update: Upcoming release Talaash marks Bollywood superstar Aamir Khan's return to the screen for the first time in almost two years. The Reliance Big release generated 406 tweets for Monday on Twitter, while its Facebook likes stood at 114,691. By comparison, the recent Jab Tak Hai Jaan and Son of Sardaar had 932 and 117 tweets four days before their release, with 307,666 and 231,898 likes, respectively.