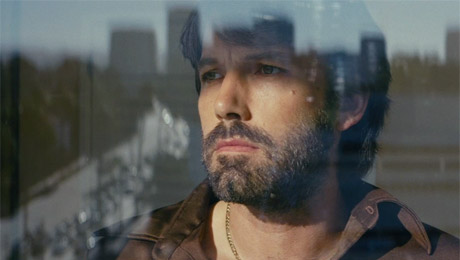 Argo crossed the $100 million domestic benchmark over the weekend. The press release from Warner Bros.:

BURBANK, CA - December 2, 2012 - Ben Affleck's widely acclaimed dramatic thriller
"Argo" has crossed the $100 million mark at the domestic box office, it was announced today by
Dan Fellman, Warner Bros. Pictures President of Domestic Distribution. One of the best
reviewed films of the year, "Argo" has earned an estimated $101 million, domestically, to date.

In making the announcement, Fellman stated, "‘Argo' is one of those rare cinematic
achievements that has been equally and enthusiastically embraced by both critics and audiences.
Its success at the box office, combined with categorical raves from critics everywhere, is a
testament to the talents behind the film, beginning with its remarkable director and star, Ben
Affleck. We congratulate him and everyone involved in ‘Argo' on this milestone."

"Argo" has been applauded by moviegoers and hailed nationwide by critics, a number of
whom have called it one of the best films of the year, among many other accolades. At the box
office, "Argo" accomplished the extremely rare feat of climbing to number one in its third
weekend in release. Overall, it remained solidly in the top ten for seven weeks, including four
weeks in the top three.

Word of mouth has been unabated, which will carry the film through the holiday season,
while the buzz surrounding "Argo" has continued to build throughout the fall, heading into
awards season. In October, the cast won the Hollywood Film Award for Ensemble of the Year.

"Argo" chronicles the life-or-death covert operation to rescue six Americans-
spearheaded by the CIA's heroic exfiltration specialist Tony Mendez-which unfolded behind
the scenes of the Iran hostage crisis. The drama focuses on the little-known role that the CIA
and Hollywood played, information that was not declassified until many years after the event.

On November 4, 1979, as the Iranian revolution reaches its boiling point, militants storm
the U.S. Embassy in Tehran, taking 52 Americans hostage. But, in the midst of the chaos, six
Americans manage to slip away and find refuge in the home of Canadian Ambassador Ken
Taylor. Knowing it is only a matter of time before the six are found out and likely killed, the
Canadian and American governments ask the CIA to intervene. The CIA turns to their top
"exfil" guy, Tony Mendez, to come up with a plan to get the six Americans safely out of the
country. A plan so incredible, it could only happen in the movies.

Warner Bros. Pictures presents, in association with GK Films, a Smokehouse Pictures
production, "Argo." The film is being distributed worldwide by Warner Bros. Pictures, a Warner
Bros. Entertainment Company. "Argo" has been rated R for language and some violent images.