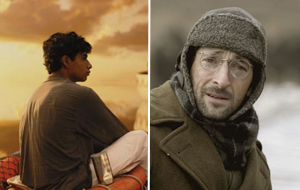 For the second straight week, Life of Pi has claimed the top spot at the Chinese box office. Ang Lee's film is riding strong word of mouth and social buzz in China, and it translated to $26.9 million during its second week. Through 11 days, the film has tallied $43 million in China. That figure puts Life of Pi at #32 on the all-time Chinese box office chart, moving ahead of John Carter of Mars ($41.7 million), The Smurfs ($41.2 million) and Fast Five ($40.5 million).

Back to 1942 posted a solid debut in the #2 spot with $21.3 million after just four days of release. The film about an overlooked Chinese famine during 1942 stars Adrien Brody and Tim Robbins.

Also opening last week was The Last Supper, a film about the Chu-Han Contention period of Chinese history. The historical movie opened to $6.2 million after four days of release.

Cold War rounds out the top five as it dropped from its $7.6 million weekend last week to $2.39 million this week. The Chinese total now stands at $39.2 million.