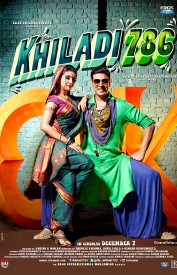 Friday Update: Khiladi 786 made great strides yesterday on the eve of its release, nabbing 720 tweets and jumping 21 spots to #12 on our buzz listings. Its Facebook likes increased to 124,366 as well. By comparison, Talaash had 4,154 tweets last Thursday (also occupying the #2 spot on the buzz listing), with 117,020 likes. Its also worth noting that Talaash had 873 tweets yesterday which means a week after release its buzz is still stronger than Khiladi on the eve of release.

Thursday Update: Khiladi 786 slipped slightly on Wednesday to 257 tweets and actually dropped a place to #33 on the day. Its Facebook likes continued to rise steadily, as it increased by 1,540 likes to 122,448. By comparison, Talaash had 640 tweets last Wednesday, with 115,993 likes.

Tuesday Update: Akshay Kumar's latest film Khiladi 786 will be released this Friday in India and select North American and UK theaters. The Eros International release accounted for 258 tweets for Monday on Twitter, while its Facebook likes stood at 118,845. By comparison, last week's Talaash had 406 tweets and 114,691 likes last Monday on its way to $1.64 million in North America on the weekend from 172 theaters.