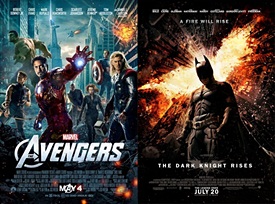 For the fourth consecutive year total yearly domestic box office grosses have eclipsed the $10 billion milestone. 2012 will surpass the milestone this weekend, making it the fastest year ever on record to reach the $10 billion mark. This year's achievement is especially notable given that this year's average ticket price of $7.94 (through the first three quarters of 2012) has stayed nearly identical to 2011's average ticket price of $7.93.

With the yearly total for 2012 set to stand at $10.05 billion through the end of Sunday, 2012 is already on the verge of surpassing the $10.19 billion total box office haul for all of 2011. With Warner's highly anticipated The Hobbit: An Unexpected Journey opening on Friday, 2012 should pass by the total gross for 2011 by the end of next weekend. The all-time yearly record of $10.61 billion set back in 2009 is now also approaching in the horizon.

Sony currently boasts this year's highest grossing studio total by a comfortable margin. The distributor has taken in $1.75 billion domestically in 2012 through the end of Friday, December 7; thanks in part to the one-two punch of Skyfall and The Amazing Spider-Man.