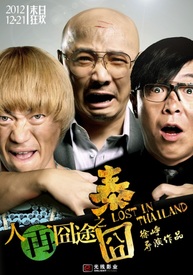 Friday Update: Lost in Thailand has reportedly grossed an impressive $72 million as of December 19. The film currently ranks in 13th place on the Chinese all-time highest grosses list behind Men in Black 3 with $82.7 million. The comedy is expected to reach $100 million at the Chinese box office, an accomplishment that only two other Chinese films can brag about: Painted Skin 2 and Let the Bullets Fly.

Tuesday Update: Lost in Thailand opened to a staggering $47.7 million in China during the week of 12/10-12/16. The comedy debuted on 12/12, so it is on pace to top the seven-day record of $47.8 million set by Painted Skin 2. The $58 million record-setting opening Titanic 3D posted earlier this year will be safe. Lost in Thailand is a follow-up to the 2010 film, Lost on Journey. The sequel focuses on three friends who get lost in Thailand. Mayhem ensues. Sound familiar?

Life of Pi fell to second place after spending two weeks on top. The 20th Century Fox release added another $15.7 million for a total of $84.6 million in China. China is easily the #1 foreign market for Life of Pi, with India ranking in a distant second at $12.2 million.

Hong Kong's My Sassy Hubby finished in fourth place with $1.5 million, pushing its cume to $3.3 million. The Cantonese-language comedy is clearly being overshadowed by Lost in Thailand.