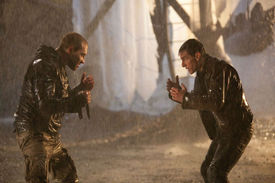 Paramount's Jack Reacher opened in 10 new countries this weekend for a total of 57 markets, and its highest moneymaker was Russia. Debut Russian ticket sales for the Tom Cruise action flick added up to $3 million, despite -- or perhaps because of -- falling on the Orthodox Christmas holiday.

Thrillers sell well in Russia, but Jack Reacher has ties that could have contributed its successful launch. The main villain, played by Werner Herzog, is a Gulag survivor named The Zec, which translates to "the prisoner" in Russian. Also of note: secondary villain Jai Courtney, a 6'1" action star best known for TV's Spartacus: Vengeance, also has a major role in the upcoming A Good Day to Die Hard, in which he plays Bruce Willis' son Jack McClane. Like Jack Reacher, A Good Day to Die Hard tips its hat to Russia by sending John McClane to Moscow to stop a nuclear weapons heist. With sales strong for Cruise's latest picture, Bruce Willis can also expect to see mighty returns in Russia.