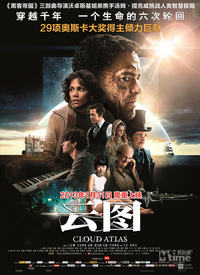 The trio announced that they will attend Cloud Atlas' premiere on January 20 in Beijing, China.org reports. Consider it a smart career move: strong receipts in China could provide a much-needed boost to the polarizing drama. Cloud Atlas has earned a mediocre $75.3 million globally. The film is all but dead in North America after raking in just $27.1 million, but it's still alive in countries such as Italy and Korea. The Chinese opening is set for January 31, whcih could prove troublesome if Skyfall gobbles up too much business after opening on January 21.