How Big Will 'Skyfall' Be In China? 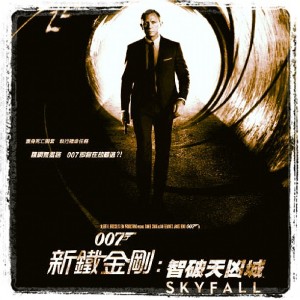 The Chinese box office is growing at such a rapid rate--2012's total of $2.75 billion represents a 31% year/year increase--that predicting grosses can be daunting. It's a good problem for Hollywood to have.

Enter Skyfall. (Or perhaps we should say an altered version of Skyfall.)

The latest Bond film hits Chinese theaters on January 21. Skyfall has already grossed more than $1 billion globally before opening in China, the second largest film market in the world. Expectations are high since 2012 was a huge year for Hollywood in China: five 2012 releases now rank in the top 20 on China's all-time highest grosses list.

Reports of illegal Skyfall copies working their way around the Middle Kingdom are causing some to be cautious about the film's theatrical potential--and rightfully so. The MPA focuses plenty of attention on combating rampant piracy in China. Inception was also pirated heavily in China and it managed to gross an impressive $70.4 million. If the impact of piracy wasn't so large, Christopher Nolan's mind-bender could have been looking at $80 million or more.

There are many different ways to look at the Skyfall's potential in China, but one thing is pretty much guaranteed: the spy flick should breeze past the $20.8 million haul of 2008's Quantum of Solace.

One Chinese source tells Boxoffice that Skyfall "could reach RMB200 million [$32.2 million] easily" during its first week of release.

If Skyfall performs in a similar way to 2011's Mission: Impossible - Ghost Protocol, its worldwide haul will see a considerable boost. Ghost Protocol posted $12.7 million in its first two days in China on its way to an impressive $102.5 million. That's enough to make GP China's #7 film of all time.

Skyfall trails Ghost Protocol in some key Asian territories, but it's keeping up with it in others:

It's also important to look at how quickly Hollywood franchises are growing in China when discussing Skyfall's potential. Take Transformers, for instance. The first Transformers film made $37.3 million. 2009's Transformers: Revenge of the Fallen upped the stakes by bringing in $62.6 million--a 68% increase over its predecessor. 2011's Transformers: Dark of the Moon--first film in the series to be released in 3D--shattered expectations by tallying $172.3 million--a 175% increase over ROTF and a 362% increase over the first film. Let's do some hypothetical math: if the Quantum of Solace-to-Skyfall increase matches the Transformers 1-to-Dark of the Moon increase, then Skyfall would be looking at a solid $57.8 million. If the QOS-Skyfall increase matches the Transformers 1-ROTF increase, then Skyfall would gross $96 million.

Check back here for updates once Skyfall opens in China.

Shawn Robbins contributed to this article.