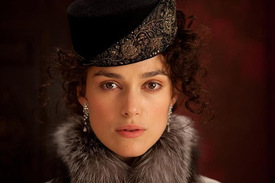 Critics and audiences haven't been able to agree on whether Joe Wright's (Atonement, Hanna) unusual adaptation of the Leo Tolstoy novel is any good. Starring Keira Knightley as the rich, unfaithful and doomed wife, Wright's Anna Karenina was too over-the-top theatrical to find mainstream appeal in the U.S., where its box office has topped out at just over $12 million.

This weekend, however, Anna Karenina made a mighty Russian debut. Its $2.48 million launch ranked it fourth on the charts, while its per-screen average of $5,072 was the highest of the weekend, besting #1 picture Life of Pi by nearly double. Still, as is to be expected for any Western remake of a treasured Russian novel, Anna Karenina isn't without its critics. A Moscow Times editorial this week reported that Russian audiences found Keira Knightley "too skinny," and found the shirts of the peasants "unnaturally clean."