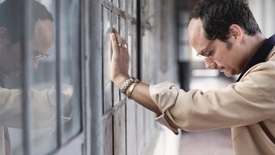 Director Heitor Dhalia is among the current generation of Brazilian helmers to find work in Hollywood. His last two films, Gone and Adrift, starred American names like Amanda Seyfried (Mamma Mia), Wes Bentley (American Beauty), Camilla Belle (10,000 BC) and Joel David Moore (Avatar). His latest, however, Bald Mountain (Serra Pelada) is a homegrown drama about the 1978 gold rush that struck an inland mountain town near the Amazon River, leading to explosive population growth, pollution and crime. At its height, an estimated 70 unsolved murders occurred at the mine every month. Serra Pelada stars Wagner Moura of Elite Squad 2, which did strong art house business last year in the States and led to its director Jose Padilha striking a deal to direct the next RoboCop, out this summer. Moura will also be seen in the upcoming Neill Blomkamp (District 9) thriller Elysium. Dhalia's 120-min period drama will be released this year by Paranoid Filmes, and a U.S. release is anticipated.