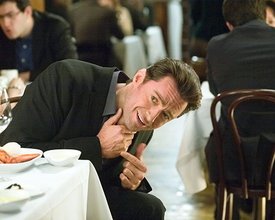 Movie 43 is off to an atrocious start at the box office. Relativity reports that the raunchy comedy managed only $1.8 million on Friday for a paltry location average of $890 from 2,023 locations. Relativity estimates that it will make $5 million during its debut frame.

That haul is beyond depressing for a film that features appearances by Hugh Jackman, Emma Stone, Kate Winslet, Halle Berry, Naomi Watts, Richard Gere and Anna Faris, just to name a few. Any one of those actors could lead a film to a stronger opening on their own. The combined drawing power should have been enough to generate more interest.

Movie 43 is another example of how star power does not guarantee healthy grosses. It comes just one week after The Last Stand proved the same point by barely cracking the top 10 even though it marked a return to leading man territory for Arnold Schwarzenegger. Content is king. Movie-goers aren't just going to automatically show up to a movie because stars are in it. There needs to be an engaging story as well. (Or at least some very cool special effects.)

Raunch for raunch's sake is also not as popular as it once was. The Farrellys invigorated raunch with There's Something About Mary in 1998, but that comedy was a hit long before YouTube. If people want raunch today, they have plenty of options to chose from at home on their computer. It takes a lot to shock people in the age of YouTube.

Movie 43 makes three recent star-studded comedic duds look like blockbusters by comparison. 2010's How Do You Know took in only $48.7 million globally against a $150 million total budget that ballooned thanks to salaries for Paul Rudd, Owen Wilson, Reese Witherspoon and Jack Nicholson. 2011's The Big Year boasted the combined star power of Owen Wilson, Jack Black and Steve Martin, but it managed only $7.5 million globally. 2012's The Watch hit only $67.4 million worldwide despite the presence of Ben Stiller, Vince Vaughn and Jonah Hill.