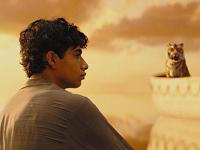 Ang Lee's epic drama Life of Pi has earned $27.8 million in Russia in its first three weeks of release, its third-highest international gross by far. Pi opened to $10.7 million during the weekend of 1/3/13 -- nearly 38.7% of its take to date was earned over those first days -- though it dipped sharply in its third weekend with just $1.7 million in receipts, less than a quarter of the weekend's top-grosser Hansel and Gretel: Witch Hunters. Life of Pi crossed the $500 million global mark last Wednesday.