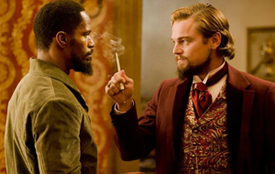 Django Unchained raked in another $42.9 million in its 2nd weekend of international releases, bringing the overseas total to $111.5 million. The film's global total is now $257.8 million. Key stats from Sony, the film's overseas distributor:

The 3D action movie opened in 19 new markets, mainly in Latin America and the Far East. We were at #1 in all but one of the 19 opening markets this weekend, and remained at #1 in Russia, which opened last week. Only in Argentina were we at #2, behind a very successful local title. The Hansel and Gretel gross in the combined 19 new territories was 127% better than the corresponding openings of Underworld Awakening, 141% better than Abraham Lincoln Vampire Hunter and 12% better than Snow White and the Huntsman in that same bucket of territories.

Brazil was the highest new opening with an outstanding $4.5M from 366 locales, ranking #1 in the local box office. This is 616% above Red Riding Hood, 154% above Underworld: Awakening, 93% above Abraham Lincoln: Vampire Killer, and 56% above Snow White and the Huntsman.

Mexico is estimated to have opened with an excellent $3.7M from 572 cinemas at #1. This is 217% above Red Riding Hood, 71% above Underworld: Awakening, 107% above Abraham Lincoln: Vampire Killer.

Colombia's debut is at an impressive $1.2M from 124 cinemas. The film ranked at #1.
The Philippines opened at a muscular $1M from 131 locations at #1
Thailand opened at a strong $939k from 52 cinemas. Position in the box office is estimated as #1.
In Singapore the movie opened at a great $900k from 60 locations. The film ranked at #1.
Panama's estimated opening is at a solid $424k from 170 locales. Estimated ranking is at #1.
Peru opened at an outstanding $721k from 60 locations at #1. Hansel & Gretel is the highest January opening of all time in the market.
Argentina opened at a very good $704k from 100 cinemas. Ranking is estimated at #2 behind local title "Tesis de un asesinado".
Hong Kong opened at #1 with $476k from 38 locales.
Chile opened at #1 with $246k from 40 locations.

Les Miserables grabbed another $14 million from 2,600 locations in 33 territories, pushing its overseas total to $175.7 million. The musical's global total is now $312.9 million. Stats from Universal:LES MIS opened in 4 territories this weekend. Iceland and Romania had very good openings. All the new opening films in Poland were affected by snowstorms and frigid weather and Croatian results will be available Monday.

We have 31 territories to open over the next few months. Next weekend, we open in Brazil, Bulgaria, Italy, Slovenia and Thailand.

Lincoln scooped up another $10.7 million overseas from 2,596 locations in 22 markets, giving it an international cume of $14.7 million. Stats from Fox, the film's international distributor:

UK ($2.76m from 511) sends the largest International delegation to the box office, followed closely by strong upstart Italy ($2.7m from 421), where the film significantly exceeds local expectations at the polls. Spain ($1.35m from 370) and Mexico ($417K from 261) remain faithful to the LINCOLN camp, continuing their strong runs in the 2nd weekend, followed by a landslide opening in Brazil ($1m from 151). Germany ($815K from 160) proves to be a battleground market, getting strong support from Belgium ($249k from 30), Switzerland ($216K from 41), Colombia ($168K from 55) and Greece ($137K from 20). Per screen averages are very strong, with reports of incredibly favorable press and WOM, which will help carry the film through February as the Oscar momentum continues. LINCOLN opens in 22 new markets next weekend, including France and Holland.