'Hansel and Gretel' Holds On To Top Spot In Russia 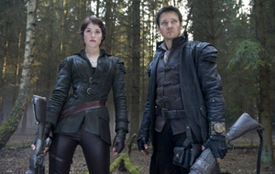 Hansel and Gretel: Witch Hunters set the tone for its successful international run when it bowed to a substantial $8.4 million last week in Russia. In its second week, the Jeremy Renner fairy tale film dipped 44% from its opening, making $4.75 million in 970 theaters, but still managed to cling to the #1 spot on the charts. Its total cume is now an estimated $15.6 million. The Russian debut of Steven Spielberg's Lincoln wasn't so fortunate, making just $290K across 408 screens. Faring better was the launch of Warner Bros.' Gangster Squad, starring Josh Brolin and Ryan Gosling, which earned a strong $2.3 million from 844 screens.