'Les Misérables', 'A Good Day To Die Hard' and 'Oz: The Great and Powerful' Headed To China 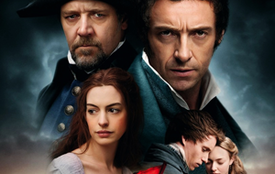 Hollywood is ready to start rolling out more blockbusters in China.

Warner Bros. has already confirmed that The Hobbit will open on February 22. Now sources tell Boxoffice that three other films are set to open in the Middle Kingdom: Les Misérables on 2/28 with an IMAX release being planned by Wanda; A Good Day to Die Hard on 3/16 and Oz: The Great and Powerful also on 3/16. Both A Good Day to Die Hard and Oz will play on IMAX screens. We are waiting for official confirmation.

Les Mis has tallied a solid $37 million haul in South Korea and nearly $5 million in Hong Kong, so it should do well in China. As of Tuesday, the musical's global haul is $314.5 million.

A Good Day to Die Hard could follow in the footsteps of The Expendables 2, a $53.1 million hit in China. Or it could end up closer to the $20.2 million haul of Looper.

As for Oz: The Great and Powerful, the benchmark will be the $34.6 million haul of Alice in Wonderland in 2010. Oz star James Franco isn't as big of a global draw as Alice star Johnny Depp, but the Chinese box office has grown so much since Alice opened--an 87% jump from 2010 to 2012--that Oz could still end up passing Tim Burton's fantasy flick.