BOX OFFICE: 'Cloud Atlas' Off To Healthy Start; 'Skyfall' Closes In On $50 Million 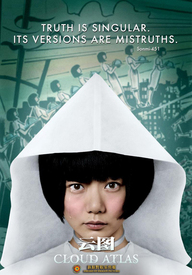 Sources tell Boxoffice that Cloud Atlas made $2.6 million (RMB 16 million) on its first day of release in China. That's a promising start for the sci-fi/fantasy flick. Cloud Atlas needs to grab all it can from China considering that its global total before releasing in the Middle Kingdom was an underwhelming $80.5 million. Early buzz on Sina Weibo, a popular Chinese social media site, indicates that moviegoers are not reacting negatively to the fact that nearly 40 minutes of footage was reportedly cut from Cloud Atlas.

Elsewhere at the Chinese box office, Skyfall is up to $44.7 million as of Thursday.