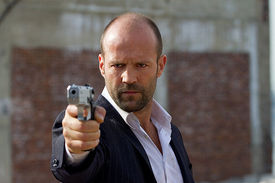 Two Hollywood flicks debuted in the top three this weekend on the Russian charts, with the action thriller Parker trumping the zombie romance Warm Bodies by over a million dollars. Jason Statham's latest earned $3.5 million across 800 theaters for a $4,418K per-screen average, enough to best Warm Bodies' $2.3 million/668 theaters/$3,510K per-screen take on both measures. The Rob Schneider and Jane Lynch 3D prehistoric cartoon Dino Time struggled to make it on the charts, clawing to just #8 on the list with only $400K. But at least it fared better than the Dax Shepard/Kristen Bell road trip comedy Hit and Run, which earned a mere $146K on 219 screens and didn't make the top ten at all.