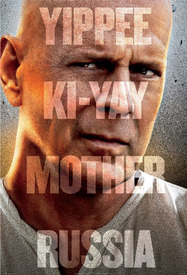 The Russian parliament is considering restricting the number of foreign films allowed to shoot inside the country in an attempt to boost local production and ticket sales. The bill suggests that movies be divided into three categories -- "national," "co-produced" and "foreign" -- while stipulating that foreign films will be denied filming permits. According to the new definitions, a national film must be at least 60% locally funded with 70% of the cast and crew being Russian. The percentages for co-produced films drop to 40%. Meanwhile, a secondary bill submitted last month demands that foreign films make up no more than 20% of the Russian box office. As perspective, in 2012 foreign films were 85% of the country's movie industry. The suggested change in policy comes the week that Bruce Willis' Live Free of Die Hard -- a foreign film shot mostly in Russia -- opens in the United States.