FIRST NUMBERS: 'Hansel and Gretel' Clings to #1 in Brazil 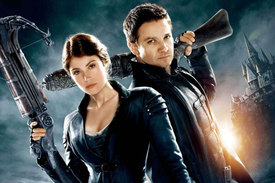 Hansel and Gretel: Witch Hunters looks to have made $1.6 million this weekend, enough to hold on to the top spot on the Brazilian charts for the fourth week in a row. If true, the streak has the Jeremy Renner adventure film tying another Jeremy Renner adventure film -- The Avengers -- which also dominated the charts for four weeks last spring. Of course, the competition during this early stretch of 2013 is much less intense. Compared to The Avengers' total Brazilian take of $63.9 million, Hansel and Gretel has to date made a solid, but much smaller $19.3 million -- still enough that it may manage a spot on the top 10 of 2013. The week-to-week drop is estimated at a mere 15%, a figure that likely received a boost from the Carnival holidays.