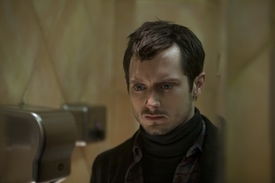 Elijah Wood's horror remake Maniac premieres tonight in Moscow, nearly a full month before its theatrical launch on 3/21, and the Lord of the Rings star was in Russia to promote the film, which screened in Cannes last May but has yet to pin down a U.S. release date despite solid reviews. The quirky conceit of the slasher about a disturbed man who pins human faces on his mother's mannequins is that it's meant to feel like a first-person thriller where the audience sees through Wood's eyes. As a result, he explained to Moscow fans that shooting it was "kind of a puzzle," as he had to be visible in mirrors and reflective surface, not to mention figure out his hand movements. Russian tabloids also reported that Wood was very complimentary toward the local women, saying, "I've never seen so many beautiful women in one place! Seriously, it's like a parallel universe!"

Watch the trailer for Maniac: