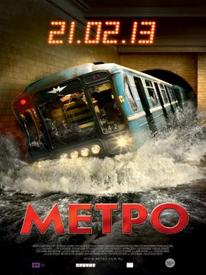 Anton Megerdichev's 3D thriller Dark World made $8.3 million at the Russian box office in 2010, a record the Russian director's follow-up, Metro, will handily beat if the opening weekend box office is any indication. Metro, a natural disaster thriller that made waves on the internet even among the U.S. press when it was announced in 2011, tracks what happens when the Moscow River spills into the city's subway system, the third most heavily used in the world after Tokyo and Beijing. As the Moscow Metro is also one of the most underground in the world -- its deepest station is 276-feet below the surface, over 100 feet lower than NYC's limit -- the flood triggers a disaster in the rest of the city. Metro's $4.5 million haul is slightly less than A Good Day to Die Hard managed last weekend, but the Defender of the Fatherland national holiday on February 23rd may have played a factor. Full box office report below.