'Rio 2' Relocating to the Amazon 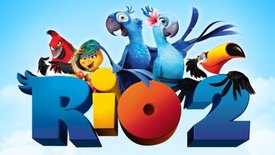 When Fox's 2011 cartoon Rio grossed $484 million worldwide on a $90 million budget, the studio immediately began work on a sequel. The synopsis for Rio 2 confirms that the film will stay in Brazil, but shift its locale to the Brazilian Amazon, roughly as far away from the titular city as New York is from Los Angeles. In the film, Blu (Jesse Eisenberg) and Jade (Oscar winner Anne Hathaway) take their three hatchlings on vacation in the jungle and, of course, things get wild. Carlos Saldanha, the Brazilian director who helmed the original Rio and Ice Age, returns, as do voice talents will.i.am, Tracy Morgan, George Lopez and Jamie Foxx. New to the film are actors Andy Garcia and Rita Moreno, plus The Hunger Games actress Amandla Stenberg, and pop singers Bruno Mars and Janelle Monáe. Said Saldanha, "In Rio 2 want to make a more comprehensive adventure....My father was in the military, so we traveled all of Brazil." Rio 2 will be released on March 28, 2014.