'Metro' Must Fend Off Two Challengers With Russian Ties 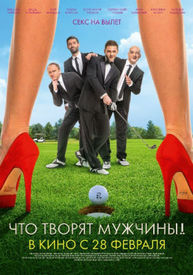 Last weekend, the Russian disaster film Metro easily stole the top place on the charts and has sold well all week. But this weekend, it follows intense -- and very different -- competition from two flicks with connections to the country. The biggest rival is the sex comedy What's Happening Man, which tracks a seduction competition between four men who have five days to bed as many women as possible for a half-million dollar prize. The second is the Renny Harlin snow-bound thriller The Dyatlov Pass Incident, which recreates the mysterious deaths of nine hikers in the Russian mountains in 1959. The fatalities initially appeared to be an open-and-shut case of hypothermia, but unexplained injuries and odd circumstances have turned the tragedy into a legend -- and now, into a found footage horror film. Also in the mix this weekend is the Canadian cartoon Escape From Planet Earth, which features the voices of William Shatner, Sarah Jessica Parker and Brendan Fraser.