'Oz: The Great and Powerful' Premieres in Moscow 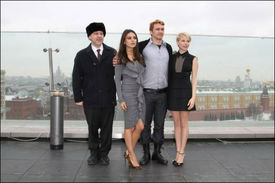 Director Sam Raimi, James Franco, Michelle Williams, and Mila Kunis traveled to Russia this week to premiere and promote their new film Oz: The Great and Powerful at the Oktyabr Multiplex in Moscow. What made the trip worthwhile was Disney's hopes of slicing off a similar box office take to their last big classic fantasy March release, 2010's Alice in Wonderland, which debuted to an astounding $13.8 million in Russia and went on to earn a total of $42.1 million at the box office. Numbers like that aren't easy to come by in Russia, but the Disney team is certainly giving Oz their best shot, even convincing its lead actresses to pose barelegged outdoors in 21 degree weather. Oz opens in Russia on March 7, a week before its U.S. launch.