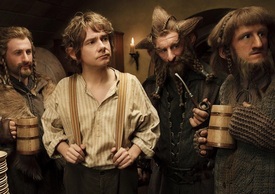 To date, the blockbuster has earned $301.4 million domestically. With its recent release in China, where it has grossed $37.3 million in 10 days, the film has earned a staggering estimated $700 million internationally, for a global total of $1 billion to date. "The Hobbit: An Unexpected Journey" becomes only the 15th film in history to exceed one billion dollars worldwide.

In making the announcement, Fellman stated, "We could not be more proud to have reached this amazing benchmark. Together with our partners at MGM and New Line, everyone at Warner Bros. congratulates Peter Jackson and his entire cast and crew on the extraordinary success of this film."
Kwan Vandenberg said, "From Berlin to Beijing, it is so gratifying to see how the release of ‘The Hobbit: An Unexpected Journey' has been such an event with audiences around the world. We know that moviegoers everywhere are already excited about the next film, as are we."

"The Hobbit: An Unexpected Journey," a production of New Line Cinema and Metro-Goldwyn-Mayer (MGM) Pictures, is the acclaimed first film in Oscar®-winning filmmaker PeterJackson's epic "The Hobbit" Trilogy, based on the timeless novel by J.R.R. Tolkien. The film recently earned three Oscar® nominations, for Best Production Design, Best Makeup and Hairstyling, and Best Visual Effects.

From Academy Award®-winning filmmaker Peter Jackson comes "The Hobbit: An Unexpected Journey," the first of a trilogy of films adapting the enduringly popular masterpieceThe Hobbit, by J.R.R. Tolkien. The three films tell a continuous story set in Middle-earth 60 years before "The Lord of the Rings," which Jackson and his filmmaking team brought to the big screen in the blockbuster trilogy that culminated with the Oscar®-winning "The Lord of the Rings: The Return of the King."
The film stars Ian McKellen, Martin Freeman, Richard Armitage, James Nesbitt, Ken Stott, Sylvester McCoy, Barry Humphries, Cate Blanchett, Ian Holm, Christopher Lee, Hugo Weaving, Elijah Wood and Andy Serkis.

The screenplay for "The Hobbit: An Unexpected Journey" is by Fran Walsh & PhilippaBoyens & Peter Jackson & Guillermo del Toro, based on the novel by J.R.R. Tolkien. Jackson also produced the film, together with Carolynne Cunningham, Zane Weiner and Fran Walsh. The executive producers are Alan Horn, Toby Emmerich, Ken Kamins and Carolyn Blackwood, with Boyens and Eileen Moran serving as co-producers.

New Line Cinema and Metro-Goldwyn-Mayer Pictures Present a WingNut Films Production, "The Hobbit: An Unexpected Journey." All three films in "The Hobbit" Trilogy, also including "The Hobbit: The Desolation of Smaug," and the final film, "The Hobbit: There and Back Again," are productions of New Line Cinema and Metro-Goldwyn-Mayer Pictures (MGM), with New Line managing production. Warner Bros. Pictures is handling worldwide theatrical distribution, with select international territories as well as all international television distribution being handled by MGM.