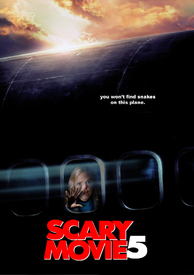 The latest installment of the horror comedy franchise was scheduled to open in Brazil on April 12th, the same day it was supposed to premiere in North America. However, it was just announced that Scary Movie 5, distributed in Brazil by Imagem Filmes, will now launch six months later on October 11th. While the look appears to signify an uncertainty about the film's box office potential in Brazil, the similarly-toned Wayans Brothers horror comedy A Haunted House performed strong in the country this February, taking in a total of $4.1 million in its first four weeks in theaters. As A Haunted House cost just $2.5 million to produce, the Open Road production practically made its money back in Brazil alone. Timing Scary Movie 5 closer to Halloween could be a smart move for a country that enjoys goofy scares -- and with relative unknowns like Ashley Tisdale and Terry Crews heading up the cast, the release could use any advantage it can think of in South America.