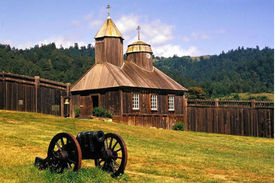 The San Francisco Chronicle reports that a Russian film crew has traveled to California's Fort Ross, roughly 90 minutes north of San Francisco, to shoot an expensive time travel epic typing together the little-explored histories of Russia and the fledgling United States in the early 1800s. At the time, Russia still controlled much of Alaska -- the territory's gold rush was still decades away -- and seemed as though the Tzar would be a permanent presence in North America. Fort Ross follows a Russian film crew who gets sent back in time to 1820 where they must help a Russian settlement and a local Indian tribe defend themselves against pirates. Director Yuri Moroz (Dark World) and writer Dimitri Poletaev built a replica of the Fort in Russia, but flew to California to film scenes near the Golden Gate bridge. "The factual part is all true," says Poletaev, adding, "Parts of it will look like Indiana Jones."